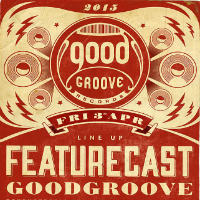 Somerset town Frome has been the site of human settlement since at least Roman times yet the most exciting thing to have happened there in two thousand years was the 2010 discovery of a hoard of Roman coins. Fact. Until this year that is. On April 3 to be specific. Why? Because on that day the fearsome Goodgroove horde plans to descend on this quiet country backwater to wreak breakbeat havoc. In the vanguard will be the mighty metropolis of Southampton’s champion ghetto funk warrior – Featurecast – who will be flanked by such storied men-at-decks as Richy J, Mr Rich & Caretaker, Doctor Hooka and Psychotropic Frequencies. That’s Goodgroove Friday then, 3 April 2015 at Frome’s mysterious ‘new venue’. Prepare for bloodshed in a pigshed!

Posted on 24th February 2015 no comments