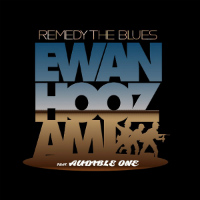 Got the early winter blues? You need a remedy for ’em. In fact, what you need is Ewan Hoozami’s Remedy The Blues EP feat. Audible One! What’s that all about then? Well for starters, it’s about Safari Strut – a Son Of Shaft-sample powered bit of party boom-bap with antipodean emcee Audible One on the mic – sample lyric, “Feel the vibration like a seisomograph/ cuz you’re spinning more yarns than a spider’s arse.” Take that mic try hards! You have been served. Then there’s Freedom which forms a bridge between the work of Ewan Hoozami and his glittering four-to-the-floor alter-ego Don Dayglow with its rap/disco biscuit vibes which – unless the monkey is mistaken – seems to make use of a one note guitar stab sample from Sir Joe Quarterman’s So Much Trouble On My Mind. That’s not the whole package of course – there are also remixes of Freedom from – deep breath – Crash Party, Fingerman, Mr Bird and the ‘almost as well-named as Mr Ewan Hoozami’, Wilson Knickit. Oh – and the instro. Want it on vinyl rather than digital? Get involved with the crowd-funding effort HERE.
(Out 16 December on Particle Zoo Recordings)

Posted on 30th November 2017 no comments