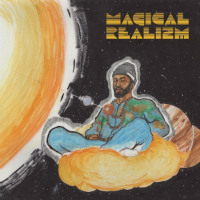 Fans of Kool Keith and Deltron 3030 pay attention, for Erthling is here with new mini-album Magical Realizm. That’s not Earthling of mid-nineties ‘Bristol scene’ trip-hop mind (though there is common psychedelic ground here) but Erthling minus an ‘a’ – a.k.a. the new project from Alabama’s David Redwine – a.k.a the rapper/ producer formerly known as Slanguage.

Opener Spellcaster employs a vintage Dr Octagon-ish beat to good effect while our man delivers suitably surreal lyricism, “Watch close I grab the moon like a mic/ Stand on the surface of the sun and recite.” GetDown provides pleasingly whimsical boom-bap lyrically exploring the best way to lay it down for the crowd while Wake Up employs a brief interlude laced with sixties West Coast stylings. New Gods is a more ominous beast that considers how best to honour the gods of hip-hop while the more triumphal fanfare-laden beat of Qui Vive edges further through the doors of perception powered by positively seismic bass. That leaves one final track, Spirits In The Flesh – another bass heavy slice of cinematic boom-bap metaphysics – to close the LP. None of which acid-fuelled antics anyone should be surprised about given cover art depicting Erthling cross-legged, on an astral cloud orbiting a sun. What else, frankly?
(Out now on Step Pepper Records)

Posted on 21st November 2017 no comments