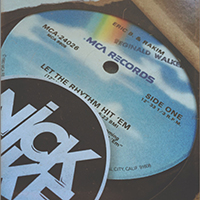 In what is turning into something of a hip-hop night here on MB – here’s news that DJ Nick Bike is due to get back on his vinyl – er – bike shortly with a new seven inch of the hip-hop remix variety. Until that arrives though, why not content yourself with a free digital rerub of one of the mighty Eric B & Rakim’s best ever tracks – Let The Rhythm Hit ‘Em. The minimal car chase funk of Eric B’s original beat is replaced by equally minimal, throbbing, New Wave-tinged funk by Nick Bike – in a manner which sits respectably besides the original. Obviously there’s no change to Rakim’s lyrics though. Go Rakim, go Rakim, go. Do yourself a favour and cop it below.