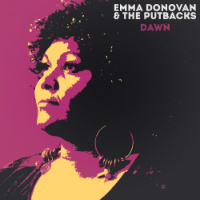 If your only experience of indigenous Australian soul vocals up until now has been the Motown sound of fluffy feelgood flick The Sapphires then the rock and even country-tinged Emma Donovan & The Putbacks‘ new LP Dawn may come as something of a surprise. There’s certainly nothing fluffy about this as the almost Hendrix-like guitar licks at the start of opener Black Woman make abundantly clear.

Yes, alright, it’s yet another Melbourne-based Australian funk-soul band but there’s more soul here and less frantic funk as Donovan’s band allow her to show that it’s not just in the states that blues ain’t nothing but a good woman gone bad. Thus it is that the album, despite only being a short set of nine tracks makes way for cuts like slowie Mother and the almost folksy Come Back To Me. Elsewhere Donovan’s voice soars above with the band’s stripped-back but heavy sound (lots more of the aforementioned Hendrix-isms, shuffling funk breaks and rock drum fills – oh and the occasional bit of Rhodes piano) giving – er – voice to the bluesy soul she’s apparently been waiting to unleash all her career. And nowhere does this occur more successfully than on the chugging funk of the Black Woman and the warmth of album highlight Keep Me In Your Reach with its mellotron-powered verse and stomping hook. Dawn then – a little bit like a new soul sun rising.
(Out now on Hope Street Recordings)