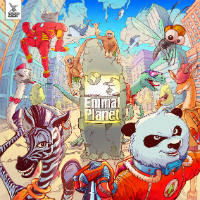 Electrogorilla (a.k.a. The Funk Fury, a.k.a Synoptix) follows 2015’s All Get Down EP on Breakbeat paradise with full-length effort Enimal Planet. It’s a nine-track affair on which our man hedges his bets by offering electro-tinged breaks of various flavours, that will appeal both to wobble fans (albeit while maintaining a healthy level of funkiness e.g. on Electrhino) and those preferring the more traditional sort of big beat aesthetic on offer on tracks like Raptor Discotheque. And as those titles probably suggest, there’s a bit of an animal title theme going on too. Let’s see now, you’ve got your large land mammals (the glitchy Lazer Panda and electro b-boy breaks of Anteloop), your insects (most wobbly cut and decidedly un-soporific Mosquito Lullaby), your flightless birds (the bass slappin’ uptempo big beat breaks of Emu Goes Like This) and your cetaceans (wafty synth affair Killer Whale Odyssey). Hell, you’ve even got your hylobates on a mid-tempo slice of big beat entitled – er – Hylobates. What do you mean, you don’t know what a hylobate is? It’s a gibbon isn’t it?! Honestly.
(Out now (Juno Download exclusive); out 19 April globally on Breakbeat Paradise)