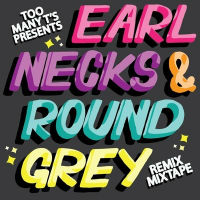 Even my chair rolled its eyebrows at the description of Too Many T’s as ‘the UK’s answer to the Beastie Boys’ but I had a listen and – yeah, alright, they’re pretty good. The Earl Necks & Round Grey’ Remix Mixtape finds Leon Rhymes and Standaloft rapping over a variety of remixed party breaks versions of old classics by the likes of everyone from the Yardbirds and Fontella Bass to Chaka Demus and DJ Format. Head straight for Get Out My Life when they go in over Seek The Northerner‘s massive remix of soul legend Solomon Burke’s Get Out My Life Woman for the best of these and an immediate sense of where they’re at. And don’t forget the skits – which they claim they spent more time on than the tracks – the Postman Pat one is essential listening. Somewhere between a London version of Bristol crew Aspects and a Rizzle Kicks who like fat beats and don’t give a shit about making twee videos featuring their parents and fat celebrity mates. Looks like UK hip-hop has remembered how to party. Cop the DL from giving a ‘like’ to their facebook page