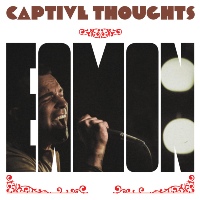 Recently released on Egon’s Now Again label is Eamon’s fourth studio album Captive Thoughts and it’s dope. Wait a minute – surely not Eamon of 2003’s Fuck It (I Don’t Want You Back) notoriety? The very same. Mind you, the man has paid a heavy penance for that crime – a poorly-marketed second album followed by ten years in the wilderness characterised by drug abuse, addiction, recovery and then recording a third LP that remains shelved to this day. Happily, a series of collaborations in the last few years with RA The Rugged Man, Jedi Mind Tricks and JMT’s Vinnie Paz (in solo mode) finally culminated in working with JMT producer Stoupe and the release Eamon’s third studio LP – 2017’s critically-acclaimed fusion of R&B and retro soul, Golden Rail Motel. It was an effort which impressed the Now Again crew so much, they offered Eamon and Stoupe unfettered access to their vaults to find samples which Eamon then took to producers Benj Heard and Snipe One to craft Captive Thoughts with.

Now – it does have to be said that this is LP is a very mini one. It only contains seven tracks, none of which are over three minutes long and has a total run time of less than eighteen minutes. Ultimately though, that only leaves you jonesing for more. Like its predecessor, Golden Rail Motel, the LP fuses retro sounds (mostly soul but also sixties R&B and doo-wop) with late-nineties/ early 2000s hip-hop and R&B beats. The funky drums, smouldering organ and Eamon’s falsetto on opener Runnin’ Around are in the same ball-park as the solo work of Monophonics’ singer Kelly Finnigan for example, while the thumping drums that underpin His Girl reboot doo-wop for 2020.  Help Me, on the other hand, takes its cues from Screamin Jay Hawkins and ends up with a bluesy slab of modern R&B that Rag N Bone Man wishes he’d done. Subsequently, Money Money suggests what a Neptunes-produced Eli Reed might sound like and slowie I Don’t Want Love investigates territory also explored recently by Lady Wray. Topping even these however are Step By Step and Fly. On the former, Eamon conjures up a convincing Smokey Robinson-esque turn over funky boom-bap drums and soaring melodies while the latter is a funky, psych-soul killer underpinned by a Save Me-esque one-bar loop.  If you didn’t catch Golden Rail Motel, this should certainly re-habilitate Eamon for you.  If you did, this is shorter but even better and the monkey’s all for Eamon permanently  having access to the Now Again vaults.
(Out now on Now Again)

Posted on 11th February 2020 no comments