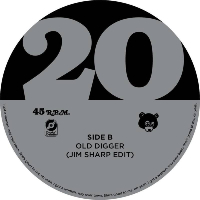 It’s a bit of special one for the second part of Dusty Donuts’ double 45 release announcement today for the piece of wax in question is the label’s twentieth drop! That’s right Dusty Donuts 20 – and who better to helm that than Jim Sharp – the man responsible for the first ever Dusty Donuts release? No-one, that’s who! Er – though, come to think of it, maybe they could get DJ Goce to help with the A-side too, as between them, the pair rebuild a Dilla track that was apparently only ever used as an intro to an early Slum Village show. From a ten second slice of grainy VHS footage! Now, that’s the kind of dedication the monkey likes. On flip, Old Digger, it’s all about Ray-sans-Kanyé (never a bad thing) as a solo Mr Sharp delivers an anthem for aging heads everywhere that’ll will nevertheless rock dancefloors populated by several generations.
(Out soon on Dusty Donuts)