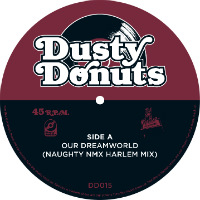 The monkey does like a slice of boom-bap soul so it was most uplifting to hear that the Dusty Donuts crew had managed to resolve recent mastering issues in time to unleash a brace of slo-mo bangers by way of an early Christmas present. This time around, crew member Naughty NMX is the man of the moment delivering Our Dreamworld (Harlem Mix) which mashes up The Continental IV’s You’re Living In A Dream World with last year’s DJ Premier/ A$AP Ferg cut Our Streets that sampled it and drums big enough to make mincemeat out of Willis Stryker and Mariah Dillard at the same time. Man, that is big drums! And because you love the good stuff, he’s also done you Let Me Go A Million Times (Brooklyn Mix) mashing up the same chilled 1976 Latimore soul groove once sampled by a certain Mr Carter along with elements of said Latimore-sampling track. Boom! And, indeed, bap!
(Out December on Dusty Donuts)

Posted on 28th November 2018 no comments