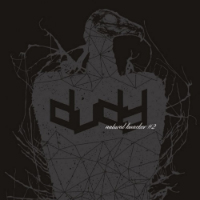 French producer and turntablist and 2013 Rock Da Club champion Dudy invites German hip-hop veterans Puppetmastaz onboard for the electro-hip-hop beats (with dnb interlude) on Urubu. A post ghetto funk, distant cousin to the P Brothers’ Digital B-Boy, the track is a veritable beast. But how to represent such business via an audio visual medium? Probably need something with a bit of menace, yeah? So how might the concept of this one been pitched? ‘Er – we could have Dudy play said track live on stage.’ ‘Yeah but he’s a slight chap – where’s the sense of danger.’ ‘Well, maybe a shimmering backdrop of a vulture…’ ‘Ok – that’s got a whole carrion vibe going on’ ‘…and two puppets in place of Puppetmastaz themselves.’ ‘How are they going to be scary?’ ‘Because one looks like Gene Simmons and the other like that freaky rabbit thing off Donnie Darko.’ ‘Yeah, alright, that is pretty scary.’ Urubu features on Dudy’s Natural Knacker #2 EP.