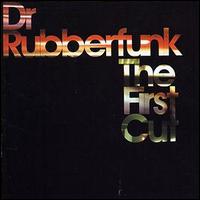 The First Cut wasn’t quite the first cut by Dr Rubberfunk (of Craig Charles’ Fantasy Funk Band fame) but it was his first album. Consisting of twelve tracks of sample-heavy instrumental breaks it occupies the place where the Herbaliser crosses paths with Quantic, Diesler and Nightmares On Wax and was so well received when it came out in 2002 (or 2003 depending on your source) that Jalapeno have decided to bounce it back into the public consciousness again on its tenth anniversary. Digitally. Complete with bonus material. The best cut on it, and the most well-known, is the upbeat snap of Disco Scene. Yes, you do know it – but don’t go looking for a reminder on Youtube, bandcamp or soundcloud because it’s not there – probably because it was made before they all existed. You’ll have to make do with the juno player below. Incidentally trivia hunters may wish to know that the album includes the twang of Rubberfunk’s first cut (but not necessarily his deepest?) – Harry The Guitar originally released in ’01.
(Out 16 July on Jalapeno Records)