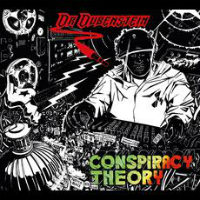 If there was ever a genre of music made to soundtrack conspiracy and rumour, it’s dub reggae. Echo vies with counter-echo, there’s an ever-present bass rumble of danger and it always seems to be performed in darkened, pungent environments where varying levels of paranoia are a given for some reason. And if there was ever a time that epitomised conspiracy it’s the current era of rampant ‘fake news’ in which fake news creators and supporters accuse real news suppliers of being the fake news creators. Enter Dr Dubenstein, self-styled ‘reggae dub master from another world’ (who either does or has done ‘sound’ for the likes of Steel Pulse, Slightly Stoopid, Don Carlos, Yellowman, Jah Works, The Itals and The Abyssinians among myriad others) with new album Conspiracy Theory.

Every track name-checks some sort of conspiracy whether it be, for example, classic standby conspiracy (Illuminati Dub), recent history conspiracy (Pentagon Bomb Dub), darknet drug kingpin conspiracy (Dread Pirate Roberts Dub) or, my personal favourite – Royal conspiracy with Diana’s Dub Tunnel. Created in collaboration with musicians from Steel Pulse, Dub Syndicate and Roots Radics, it’s a rich mix of both the rootsy and the electronic to immerse yourself in as the world holds its breath while Trump deliberates over brightly coloured buttons labelled things like ‘Nuke N. Korea’ and ‘Nuke Syria’ on the control console presented to him by the CIA. Mind you, if the CIA presented it to him, maybe it’s only a ‘control’ console and the nuclear buttons are only ‘nuclear’ buttons. That would make the CIA sort of good guys though and if that’s the case what, then, are we to believe about the deals they cut with the ‘Greys’ at Roswell in the 50s, the LSD experiments on G.I.s in Vietnam, and the booby-trapped conch left for scuba-diving jefe maximo Fidel Castro? Oh wait, the last one was true. Or was it? Gahhhh.
(Out now on Echo Beach)