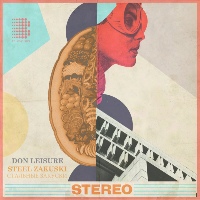 Don Leisure’s full-length retro Russian samples-based beat tape, Steel Zakuski follows hot on the heels of last month’s single Valery’s Fate which features in this mammoth twenty-one track set. One half of First Word Records’ The Darkhouse Family, the Don is widely-travelled and less a collector of the in sound from way out so much as a collector of the spaced-out sound from way out. Proof of that can be found in a previous comp. Halal Cool J which should have received some sort of award for the name alone let alone its dope bass-heavy, dusty breaks makeover of obscure Turkish psych samples.

Steel Zakuski applies a similar approach to samples lifted from Russian recordings of the 70s and 80s. ‘Zakuski’ of course is a Russian form of entrées or cold hors d’oeuvres but if track lengths are almost exclusively shorter than three minutes (such is the way of beat tapes), the approximately forty minute run-time of this drop should be ample to keep even hungry ears satisfied. Expect a sea of retro synthwork from behind the Iron Curtain washing over dusty drum breaks and periodically punctuated with similarly ancient vocal snippets plundered from movies. Gets a big ‘Da!’ from round these parts. The release was originally available in both cassette and digital formats though cassette commandos will be disappointed to hear that tapes have sold out already.
(Out now on Group BraCil)