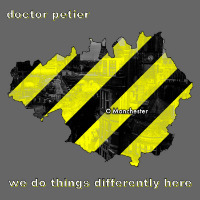 Manchester outfit Doctor Petier are doing their rounds again to ensure the world is fully dosed with an appropriate amount on Manc-funk, this time dispensing new release We Do Things Differently Here – the second in a three mini-album series. While immediate predecessor Back To 169th Street worked its syncopated magic with 90s hip-hop and soul production values, things on this sound a little more back-in-the-day. Partly that’ll be the blaxploitation bongos and Miles-ish trumpet work though if that suggests this doesn’t hit hard – then check the fuzzed-out crunch of the breaks on Kool Rules or Rock Hot. Before the end rolls around there’s time for what is presumably a tribute to a certain now sadly deceased A Tribe Called Quest emcee in the shape of a jazz-funk groove that if slowed down a few bpm would be more than a little Tribe-ish. Best cut however is this drop’s odd track out, Make It Happen, which rocks an almost G Love & Special Sauce-ish vibe.
(Out now HERE)