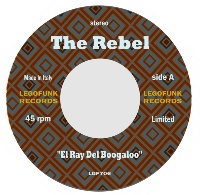 Lego Funk has constructed yet another splendid edits 45 here with a brace of reworked Latin funk cuts for the new DJ’s Choice vinyl 7″. On the A-side for example, you’ve got Pablo Ruiz’s reflip of Roberto Roena’s 1974 salsa-influenced number Que Se Sepa as sampled by Ugly Duckling on Let It Go. Now vastly extended with additional drums and percussion, it’ll have anyone who can keep up sashaying around the dancefloor for well over five minutes. And then on the A-side (yes it’s a double A-side!) you have the arguably even better El Ray De Boogaloo – or The Rebel DJ’s monster re-rub of Ray Barretto’s already monster Latin boogaloo funk original, Right On. This one’s also extended as well as chopped around a bit, so you’ll have to pick carefully which of these two you drop first since it’s unlikely punters will be able to cope with this much Latin heat back to back! Only 300 pressed so get on it!
(Out 22 July on LegoFunk)