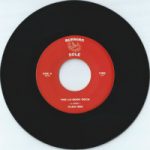 Forget Trump’s Russian rip-off military hardware parade and make way for some 45 calibre heavy weaponry from Djar One and DJ Tron on this new Burning Sole Records seven inch. The A-side finds Djar One unleashing monstrous funk drums augmented with guitar fuzz, subby bass and vocal samples from the likes of the Beastie Boys – though Black Dynamite gets a look-in as well. Over on the flip DJ Tron’s Bombshell is also primed with a fat rolling break while jazzy keys and flute are to the fore in the melody – look out for the Latin drums breakdown in the middle and hear it build to a crescendo with the horns! Now that’s how to impress a crowd.
(Out now on Burning Sole Records)