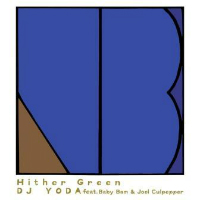 The new single from DJ Yoda is one of two cuts off his recent Home Cooking album to feature legendary Jungle Brothers MC, Baby Bam – in this case the contemplative Hither Green. It’s also one of two cuts off said LP to feature rising UK R&B star Joel Culpepper. On the track, the latter gets to bare his soul against a stuttery beat and string-laden backdrop while Bam is given a sparser arrangement of just drums, bass and piano over which to take time out and have a word with himself about exactly which way this ‘thing’ with his other half is going to go. All that, and it’s named after that part of the London Borough of Lewisham described by the Grauniad as, “not cheap but the lesser of all local property price evils.” And you thought all it had going for it was that Jude Law used to live there.