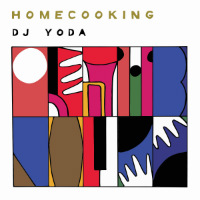 Looks like the fourth is strong (thank you, I’m here all week!) in Dj Yoda’s latest LP, Home Cooking which, if you don’t count his self-released Piano Breaks ’98 cassette job, is his…er…fourth solo studio long-player. Well, I say ‘solo’ but Home Cooking (or ‘Homecooking’ depending on your source) actually features a host of guest appearances. And you know someone of Yoda’s calibre is going to pull in big names like the tractor beam of a death star or something – step forward old school hip-hop legends Jungle Brothers and Edo G, British soul don Omar and rising UK jazz saxophonist Nubiya Garcia, among others. Man, that is a big line-up of guests!

Of course, with Yoda’s cut and paste breakbeat background, you’d certainly expect him to knock out a bit of hip-hop on this. And if that’s what you’re looking for, you won’t be disappointed with the JB’s-featuring Afrika on which a sparse beat pairing a fat kick drum with equally fat Run DMC-style baby scratches and a harmonica loop provides a bedrock upon which Baby Bam and Mike Gee can rock a mic. Indeed, were it not for the more modern production touches you might even have thought it was 1985. You also get former single Roxbury which recalls another of hip-hop’s great periods with the summery warmth of its early 90s Native Tongues/ Jazzmatazz vibe. This sees Edo G unload a two and a half minute message of self-belief and positivity until the script is flipped, G vanishes and the remainder of the track’s four-plus minute length involves Nubiya Garcia get all Lisa Simpson with a floating sax solo. Then there’s the more reflective Hither Green which pairs Baby Bam in his second appearance on this delivering verses while another rising UK star, Joel Culpepper, provides the hook.  Wait a minute – Hither Green? Yep, Yoda’s named a track after part of Lewisham. In fact, he’s named every track on this after somewhere. Afrika is obvious of course (plus a reference to Baby Bam’s full emcee handle) and you might have noted the Edo G cut is named after G’s home suburb of Boston, Mass. You can also expect a name-check for Hackney’s London Fields on the Rhodes-n-sax drenched, soul-jazz-hop opener featuring Joel Culpepper and part of Bristol on the Eva Lazarus-featuring jazzy slo-mo drum n bass of Eastville which recalls the 90s work of Alex Reece and Reprazent.  Oh – and a track named Abbey Road (where some of the album was recorded) which is an instrumental jazz-hop number even if it does have a bassline apparently nicked off The Cure’s Love Cats.

What should be apparent by now, of course if that this is an LP that is absolutely shot through with jazziness.  As luck would have it, this doesn’t just reflect Yoda’s early 90s rare groove and hip-hop influences on this LP but fortuitously taps into the current resurgence of the UK jazz scene – even though according to the PR this latter is pure coincidence.   It also renders it the perfect hangover soundtrack – and I wouldn’t put it past Yoda to have considered this when putting the album together.
(Out now (digital)/ Out 24 May on vinyl on Lewis Recordings)