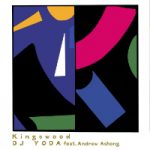 It’s new single time again from DJ Yoda as he releases Kingswood which, by the monkey’s reckoning is at least the third single from his recent long player Home Cooking. This, Yoda’s fourth studio album, provided evidence of a decidedly nineties-ish rare groove and jazz-meets-hip-hop sound palette which is well exemplified by Kingswood‘s lushly orchestrated, piano-laced slo
-mo boom-bap and Andrew Ashong’s soulful croon. It’s the kind of the thing that makes Home Cooking such a great hangover album. It is also (like the rest of the album tracks) named after a place. Funnily enough, there’s a suburb of Brizzle called Kingswood and it’s precisely the sort of place you could earn yourself a mighty hangover at fabled suburban nightclub Chasers. It’s not named after that Kingswood.
(Out 23 August on Lewis Recordings)