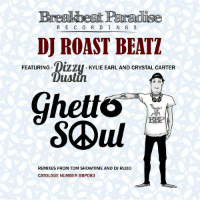 Hello, it’s Roast Beatz with his first release on on Breakbeat Paradise – the Ghetto Soul EP and he’s brought along Ugly Duckling Dizzy Dustin to spit a few bars in the gaps between Kylie Earl‘s soaring vocal on Do What You Love! Not so much ghetto gone funky now as ghetto gone soul, then. With a lil nod towards hip-hop. Also, DJ Rudd‘s on hand to provide a rework which is neither soul nor hip-hop – “it’s electro. Prick.” I’m feeling ghetto-sleaze-funk scratchfest and Crystal Carter vehicle Ride It Out just as much though. As luck would have it, Tom Showtime was in the building to rework this into a somewhat bleaker jazz-hop-breaks thang. Yo what’s good Roast Beatz?
(Out 31 January on Breakbeat Paradise (pre-release 24 January on Juno Download)