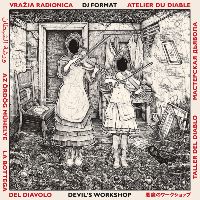 If ‘the devil makes work for idle hands’ then the pandemic has been nothing less than a veritable ‘devil’s workshop’ – so be glad at least two of the hands in question belonged to DJ Format who has summoned forth a suitably prodigious creative opus in the form of his new album entitled, naturally, Devil’s Workshop. Which is not a hip-hop record. At least not in the sense of having any emcees on it. Or indeed any vocal contributions other than an occasional loop. It is, however, a sampling masterpiece to rank alongside the greats. Comparisons between this and DJ Shadow’s debut long player Endtroducing have already been made (and not just in this album’s PR) as well as with the work of David Axelrod. The monkey’s going to suggest two more though. For while this shares some similarities (sample-based instrumental album by a hip-hop producer) with Shadow’s effort from ’96, the unifying psychedelic nature of the sample sources arguably make Edan’s 2005 LP Beauty and the Beat a point of comparison too – even if that does feature emcees. On the other hand, if you were to imagine Prince Paul collaborating with a Zamrock band, you might have an even better sense of what Format has conjured on Devil’s Workshop.

If you know Format, you’ll know he’s a past master at sample collages and fat beats but you’ll also probably know that while never losing his hip-hop production sensibilities, he has over the years become increasingly drawn to 60s psychedelia. The clues have always been there anyway but perhaps most obviously in his project The Simonsound with Simon James and BBE compilation DJ Format’s Psych Out on which our man assembled all manner of psych nuggets from around the globe. On the latter however, Format was curating whereas on this he’s creating and on the former he was collaborating while this time he’s flying solo.

And so to the music. Now, admittedly, the slo-mo pace, heavy drum break and melancholy tone of opener The Time Has Come do evoke something rather Shadow-esque and if you stopped listening there, the resemblance would be fair enough. Go further however and it begins to unravel. The beats are often funkier for one – see second track The Light and monkey favourite Warm Dust. There’s also the consistent evocation of that late sixties era of psychedelic beats as Format mixes up psych-guitar fuzz and jazzier stuff for a feel that is frequently ‘cinematic’ on cuts like Disaster Time, The Curse and Blind Man. Plus of course there’s our man’s employment of vocal loops which, when they are used, are arranged to be more like the actual contributions of a vocalist – particularly on Brainstorm and closer Strange Sensations. And let’s not forget a kind of album-length subtext about the trials and tribulations occasioned by the creative process into which the many sung and spoken word samples feed. Not an easy taskmaster the Devil, but he does have some damn good tunes.
(Out now on Project Blue Book)