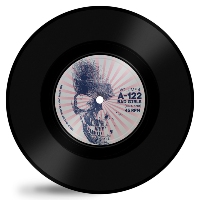 Told you we weren’t done with DJ DSK news this month and here’s the next item – which turns out to be nothing less that Vol. 4 of our man’s DNA Edits vinyl 7″ series. But what has he taken a scalpel to this time? Well, since you’re asking, side A has a crack at disco queen Donna Summer’s Bad Girls. This one’s more about tweaking the beat and arranging than lengthy extensions – though (what with there being little worthwhile room to extend a nearly five-minute long original cut on 45) and nu-disco fiends’ll be all over it. Now then, slide over here and give me a moment to tell you about the flip which (as people of a certain age might already have guessed from this sentence’s opening) is DNA’s breakbeat refix of one of the biggest ever tracks by Oz rock gods INXS. Which one? I’ve got to let you know…Need You Tonight? Course it is! Though now with big-ass kicks and snares so it can tangle with your favourite party breaks and hip-hop cuts without sounding weedy. Altogether now, duh, duh, duh, dadada-da-daduh!  Super limited so get your skates on – oh and since the sample police have finally caught up with Bandcamp – you’ll have to be checking sound clips HERE.
(Pre-order now; shipping approx. 19 July on DNA Records)