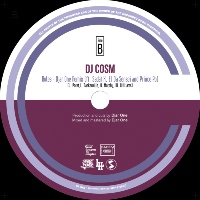 Right, let’s get back to the Rules with Dragon Fli Empire’s DJ Cosm laying down some snarling stripped-back boom-bap and getting battle-hardened veterans Sadat X, El Da Sensei and Prince Po to explain what it takes to be a proper MC. And as X points out – things were rather different if you came up under Grandmaster Caz than these days when, “anything will pass.” Back then it was all, “Gladiators with mic chords,” who, “strangled rap frauds.” Yo – tell them X!  But don’t let’s forget the deejays either – Cosm’s not just on production but provides cuts too (with additional production from Metawon) while Beats House head honcho Djar One produced the remix, going for a more percussively layered and scratch-laden Tribe-ish beat. Comes in 100 purple and 200 black copies; no re-press!
(Out 1 July on Beats House Records)