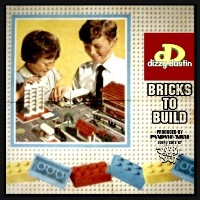 Amid the regular flurry of Allergies releases featuring Andy Cooper as well as AC’s multifarious solo drops, you might wonder occasionally what’s happened to the other half of Ugly Duckling’s mic manipulation team, Dizzy Dustin. While not as omnipresent as his erstwhile comrade-in-bars, our Mr McFarland has been known to surface every so often with a new project and the arrival of single Bricks To Build just happens to be one of those very times. It seems the release presages nothing less than a whole new album entitled Where Do I Go From Here, and finds DD in fine fettle, repping (as ever) Long Beach CA and professing, over a heavy, lurching, piano-laced beat (courtesy of producer Pandamonium), “Let’s be real/ It’s in my DNA, I got too much skill/ I still got a deal and instrumentals to fill.  The track also features outro cuts by Jabbathakut and if you’re a subscriber at therealdizzydustin.com, it’s even free until 8 August!

Posted on 2nd August 2020 no comments