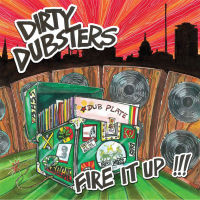 Please don’t adjust your seismographs – all that intense activity is just the Dirty Dubsters‘ debut album. Fire It Up finds the boys who put the ‘dub’ into Dublin lighting up the bottom end bong to finally make (split infinitive intentional) their first full-length journey into outer bass. Production crew are the Dubsters themselves of course while vocal crew are guests: Mystro, Leiko Tola, YT, Clinton Sly, Turbulence, Danny Red, Burro Banton, Sista Quanna and the mighty Blackout JA and Bass Nacho. I don’t know about you but I think it’s time for a ‘Byron Crawford’ track by track analysis – haven’t done one of them in a while. Here goes:

FIRE IT UP feat. MYSTRO
Current single and reggae/ hip-hop hybrid featuring UK rapper Mystro who extols the merits of lying to the police and smoking drugs. And why not? At least he’s not beating up those of a different colour or faking evidence.

MUSICAL HUSTLERS feat. Leiko Tola
They might be dubsters but here’s some more hip-hop. Dirty hipsters? It’s got a ring to it. Love it or hate it, the sample on this is distinctive to say the least – bit of a late eighties south Bronx vibe going on.

REAL BAD BOYS feat. Bass Nacho & Blackout JA
Hip-hop/ dancehall hybrid on which the Florida and Bristol toasters respectively have a contest to see who can do the most permanent damage to their vocal cords. It’s a dead heat because they’re both so badass.

IT’S ON NOW feat YT
YT presides over a move into a more pure form of dancehall. The sort of thing I’d have expected to hear at St Paul’s Carnival last year, if Bristol City hadn’t cancelled it due to a £130 000 shortfall. And then spent £500 000 on policing an EDL march which they’d allowed to happen.

DO IT feat Bass Nacho
The Nach is back. On a gritty bit of 2 step. Less one I’d like to dance to than one I’d like to watch the ladies dance to. I bet they get filthy when this comes on.

SET IT OFF feat. Clinton Sly
140 bpm jungle? Actually more like 132 bpm according to my reckoning. Whatever it is – Clinton Sly performs something in patois that I won’t even pretend to understand.

WHEN THE ROAD CALLS feat. Turbulence
Nice bit of digital reggae with a bit of a drum fill that makes you think it’s going to go all junglist. It doesn’t. One of my favourites…

ANSWER MI QUESTION feat. Danny Red
…as is this with its shades of Under Mi Sensi…

COMMENTS
Superb production, quality vocals and a beat for all those who like any of bass music’s Jamaican-related genres. Nice one boys. When you get a minute – light another…
(Out 11 March (vinyl)/ 25 March (digital) on Irish Moss Records)

Posted on 25th February 2013 no comments