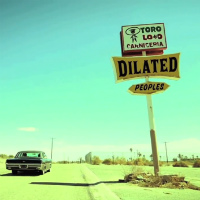 A while back, press releases gave out that the forthcoming Dilated Peoples LP Directors Of Photography was due in 2012. When that didn’t happen, it was all ‘it’ll be out in 2013’. Since that didn’t happen either, the new rumour is that it will be out in 2014. What makes the oft-repeated news more plausible this time is that it’s accompanied by both a single (Good As Gone), a video and a drop date for the LP. The video, filmed on the edge of the California desert in ‘urban’ surroundings, “plays out like a barrage of Instagram worthy frames and showcases their skills as ‘Directors of Photography'”. Er, yeah, whatever mate. The good news it’s the best thing they’ve done in over a decade as they rope in Premier to give them a Platform/ Expansion Team-era beat (pianos tinkling over epic chords and stuttering boom-bap) and spit resurrectionist rhymes like, “But I broke through my grave/ Ripped the coffin box the hell apart/ Head first yelling ‘Maggot Brain’! Funkadelic art.” Or something. Incidentally, it looks like Evidence has had the easiest paper round since the early 2000s. Tour dates below vid…