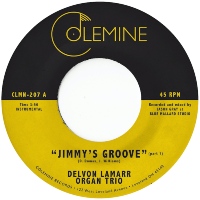 Currently in digital format only (though eventually it will be part of a Pt 1/ Pt 2 45), is new Delvon Lamarr Organ Trio single, Jimmy’s Groove. Initially, it’s a relatively sparse arrangement, consisting mainly of a fat drum-break, bass and organ (naturally) in that order, though the guitar contribution picks up increasingly from rhythmic chops and stabs around a quarter of the way in to more substantial grooving later on. The vibe is very much borrowed from (or a homage to) either Mr Smith or Mr McGriff or possibly both, though these ears are leaning more to the former. The track is the last one (and a previously unreleased outtake) from the I Told You So studio LP recording sessions engineered by the Polyrhythmics’ bassist Jason Gray and is about as close as a body can get to late 60s/ early 70s jazz funk nowadays without getting in a time machine.
(Out now (digital)/ 17 September 2021 on vinyl HERE)