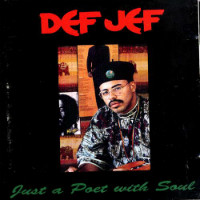 Yo – Def Jef’s back. Well – re-released anyway. Just A Poet With Soul was the NYC born rapper’s debut at the tail end of the 80s and featured the kind of funky uptempo hip-hop dropped by Young MC and the UMCs. When he wasn’t trying to house you that was. Yeah – Jef was quite partial to a bit of hip-house backing for his mixture of party rhymes and socio-political comment. Now on the one hand of course, some hip-house was indistinguishable from hip-hop. And if you don’t believe me, check the Ultramagnetic MCs’ Kool Keith Housin’ Things or even more so – EPMD’s I’m Housin’. Some of Jef’s stuff was a bit like that. On the other hand, some of Jef’s stuff sounds a bit more like his own Do You Wanna Get Housed. In this case, the answer’s no, I don’t wanna get housed but don’t worry – that’s not what you’ll be listening for anyway.

Allow me to guide you towards block party cut Givin ‘Em Rhythm, funky racial awareness cut Black To The Future or fat and funky jam God Made Me Funky with big farty synth bass stabs which fit nicely with today’s obsession with the b-wobble. There’s also the late Etta James dropping by for the hook on Droppin’ Rhymes On Drums. Lots of instrumentals on CD too (yes, this isn’t on wax) and wah-wah crazy non-album cut Phunky Az Phuck. Yo, it’s real def man.

Posted on 22nd September 2012 no comments