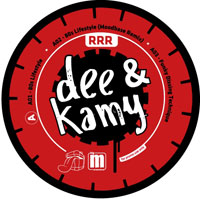 Boom! Dee & Kamy‘s 80s Lifestyle EP is the mainest dancefloor bomb. Monkeyboxing repping the third thing in a row with five stars? Damn straight! Not only is this November the most ridiculous month for quality funky ass music all year this year, but for many a long year. And (despite being on the BigM label, known for it’s nufunk/ ghetto funk/ funky breaks output) this is a banger among a year of hip-hop bangers. Dee & Kamy drop straight up retro-funky hip-hop to make you party like it’s 1989. Bizarrely the trio (yep, three of them, I’ll get to that) hail from Lithuania – though put any thoughts of comedy Eastern European accents aside – Kamy sounds straight up NY on the mic and Dee tears up the dancefloor with Main Source/ Brand Nubian/ early Masta Ace style beats. Third member Mamertas apparently exists solely to provide additional saxophone and on the title track he goes full eighties – which is pretty taboo round these parts…but there’s no way I’m going to argue with what they’ve created. This EP is riddled with funk and old school hip-hop references and samples (Aretha/ Mohawks/ The JBs/ House Of Pain) without sounding like you’ve heard it before. Four original tracks, (plus a brace of ghetto funk remixes from Telephunken and Moodbase) every one a banger, taking it back to when hip-hop was all about gleaming shelltoes, fat laces, block parties and breakin. And it sounds fresh as fuck. Apparently all these tracks featured on D n K’s 18-track debut LP Original Taste released last year and of which, suspiciously, only phantom links now remain on t’internet. I smell a lawsuit…
(Out now on Big M)

(PRESS RELEASE)
BigM presents… Dee & Kamy – [BigMP15]
These two guys from Lithuania doing their vinyl debut here on BigM Productions, are the discovery of 2011. Ultra funky Hip Hop touching breaks that guarantee a lot of fun and floor movement. Four original tracks and two rocking remixes by Moodbase and Telephunken are as much as you can have on one EP. A sixpack full of krafty skills you can’t miss.

A01) Dee & Kamy – 80s Lifestyle
Groovy 80s touching saxophone, solid breaks and unbelieveable
self-made Hip Hop vocaling give this track it’s character.
A02) Dee & Kamy – 80s Lifestyle (Moodbase Remix)
Moodbase does his bass loaded version of the opening tune bringing in more toughness for the later floor time.
A03) Dee & Kamy – Funky Dissing Technique
Cool grooves, great lyrics and some funky guitar action end up in an easy lovely breaker.
B01) Dee & Kamy – Believe in
Ultra funky bassline, great piano works and like in the other tunes a can’t-believe creativity in lyrics.
B02) Dee & Kamy – Believe in (Telephunken Remix)
Telephunken from Spain brings the already huge original on the next shack blowing level.