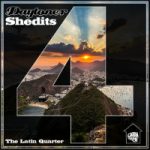 The last couple of years have been busy for Daytoner what with all the live appearances with the band and the album and the 45s – so much so that we haven’t seen a new one of his always quality Shedits EPs for two years. Of course, we have been blessed with select tracks off volumes 1-3 appearing on vinyl seven inch but now it’s time for four new cuts and one previously released oldie – all on a Latin theme – hence the subtitle The Latin Quarter for Shedits 4. MB regulars may remember Daytoner’s breakbeat boogaloo rerub of Joe Cuba’s Bang Bang which was the highlight of Carnibal Records 002 drop back in 2012 and in its re-mastered 2019 form sounds even more dope. And now it’s in the company of four other bangers in a range of Latin flavours: opener Salsational which goes big band breaks with the salsa sound, Ye Mele which gives Brazilian Luis Carlos Vinhas’ Ye Mele some leverage, a second Brazilian (ooer!) in the form of the more minimal sweaty shimmy of Comanche and the monkey’s other favourite a funked up boom bap flip of Cuban brass-led effort Bebo’s Beat by way of a closer. Which should have you positively salivating at the prospect of what Daytoner releases next on 45.
(Out 2 August HERE)

Posted on 1st August 2019 no comments