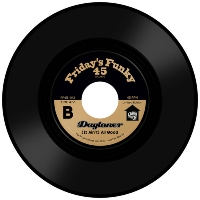 Imagine if Nas’s AZ-featuring Illmatic track, Life’s A Bitch, had a beat done in the style of J-Swift’s work on debut Pharcyde album Bizarre Ride II…? Daytoner and assorted bandmates certainly have done for the A-side of Friday’s Funky 45 Vol. 12 in their fifth crack of the FF45 whip alongside such hallowed company as Featurecast, Smoove, Freqnik & WDRE, Flipout and Red Astaire. Gone is the stoner head-nod of the original replaced by something a whole lot more life-affirming.  Turn things over and Daytoner (now on his own) does another cheeky version, this time of De La Soul’s Chaka Khan-featuring All Good. Except is it a cheeky version? With Trugoy, Maseo, Posdnuos and the original beat replaced by a slice of Rhodes-powered powered soul, it ain’t All Good is it?  No, indeed, it’s (It Ain’t) All Good because that’s the times we’re living in and people need musical sympathy! Too real and chill for you though? Flip back to the A-side party and start again!  Daytoner’s got you covered from every angle!
(Out 2 April on Friday’s Funky 45s)