DANNY SPICE & The WILDSTYLE TRIBUTE BAND: Live At The Throwdown (2014) 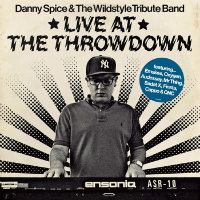 Danny Spice brings the flava once more with his latest, Live At The Throwdown, which (while not actually ‘live’ – the name is a tribute to the night he used to run) it certainly throws down the gauntlet to the boom-bap underground with an eight-tracker so heavyweight its mass has actually generated its own field of gravity. Naturally, such an entity attracts satellites and the sheer pull of Spice’s beats can be measured by the quality of these – vocal entities of such good people as Emskee for example, those who can recognise the science of sound like Oxygen and Audessy, ancient presences who were brand new(bian) during hip-hop’s childhood like Derek – oops my bad – Sadat X and QnC and a DJ of the stature of Mr Thing. Best cut is the Emskee-featuring Never Popcorn which contains several tons of rhythmic blue juice. What’s that? It’s hip-hop, we all know what it is and Spice and the ‘Wildstyle Tribute Band’ aim to be the best and keep it fresh. Who could possibly take up the challenge…?
(Out now on Carry On Going Records)

Posted on 14th November 2014 no comments