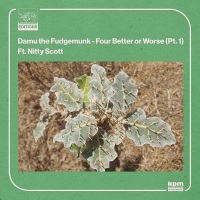 Imagine if a host of quality hip-hop luminaries like The Roots’ Stro Elliot, J-Live, Jazzy Jeff, Bastien Keb, Chris Dave, Corey King and more besides were given the keys to the KPM library music vaults? And imagine if, in tandem with this first project, KPM were also gearing up to release original music with a host of talented musicians, vocalists and producers as well. Well, in partnership with London-based hip-hop label Def Pressé, that is precisely what is happening with both the Def Pressé Editions/ KPM Crate Diggers and Def Pressé Editions/ KPM Originals in the offing. To wet your whistle, and to launch the first of these two series, here’s producer Damu The Fudgemunk’s Four Better Or Worse Pt. 1. The track is a gloriously jazz and psychedelia-informed bump – the first of a four part, twenty minute suite – and features featuring rapper Nitty Scott sticking the man’s attitude to race back in his face.
(Out now on Def Pressé)