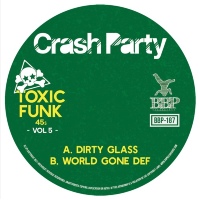 Breakbeat Paradise keep up a very successful run of 45s as Crash Party – er – crashes the party with Toxic Funk Vol. 5 and a double measure of hip-hop influenced booty. We’ll start by considering B-side World Gone Def. which marries Joe Tex, Method Man and a funky boom-bap rhythm for a joint which could well have been an A-side itself were it not for the fact that the A-side on this, Dirty Glass, generates even more heat. Is it the marginally faster but much looser rolling drum break? Is it the re-purposing of a Jay-Z ‘pella? Or the fact that said ‘pella is juxtaposed this with a bit of Manfred Mann? It’s all of it of course which culminates in a sureshot floor filler. And what more can you ask for to cold rock the party?
(Out now on Breakbeat Paradise)