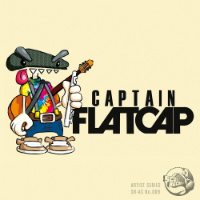 Madder than a saran wrap skullcap, a mousetrap mishap or even a relief map hubcap, it’s Captain Flatcap – twenty-first century breaks’ answer to Spike Milligan and Yello getting together to make some tunes in a nitrous oxide factory. The trio have finally released the long-awaited Captain Flatcap LP and this is the nearly as long-awaited MB post about same which is well overdue some attention.

Why? Because it’s still one of very few album-length drops of all original material to emerge from the new school of wobble-bass breaks music and has the chops to stand alongside previous such efforts from the likes of both Featurecast and Badboe. Ostensibly a wobbly take on electro swing, the album actually draws its influences from ghetto funk, dubstep, hip-hop, P-funk, Balkan breaks, dnb – oh and and even – er – what sounds like somebody’s idea of pumping Eastern European house on part of Sergei’s Journey too. Of particular note are opener The Awakening which comes on like a dubstep version of Jethro Tull, loping wobble-fest Alien Jazz which sounds like something synth pioneers might have come up with for an early seventies BBC kids’ TV programme and the LP standout featuring Great Scott – Boom Bap Boxing – a bona fide roof-raising Brit-hop monster. Stick that in your trade gap landing flap!
(Out now on Scour Records)

Posted on 18th December 2016 no comments