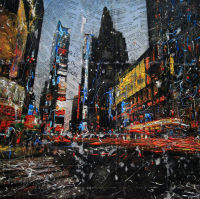 Sure You Want More? asks the title of the new LP from Capitol 1212 – the Edinburgh outfit known for their bashment material but who, back in the day, were no mean hands at turning out hip-hop bumps too. And it is the latter genre that this twelve-deep collection of singles, demos and unreleased gear represents, featuring guest vocalists from both sides of the pond including Cold Crush Brothers’ Grandmaster Caz, Jungle Brothers’ Mike G, Edo G, J5’s Akil, Ugly Duckling’s Dizzy Dustin, Profisee and Serocee. Blimey.

While a neck-snap vibe is the name of the game here though, it comes in all kinds of iterations. The Profisee and Danny Diamond opener, Single Thing, ploughs an almost U.N.K.L.E-like path combining indie-style vocals and strings with rapped bars, whereas Shootin Stars (feat. Mikel Krumins) provides a mid-2000s operatic beat and Sonic Boom Six vehicle Emperor crosses over into reggae territory. You can also expect to find a range of uptempo funky party bangers (of course!) like classic Good Feelin in both Reci P’s All Star Refix mix featuring Akil, Donald D, Rebels To The Grain and Skenkie as well as the original version featuring Mike G, Dizzy Dustin, Cadence, MCM and DJ Sheep. Even this is given a run for its money however by Grandmaster Caz’s turn on the Son Of Shaft-powered Encore and the practically euphoric Commodores beat-powered Fly Times featuring Time Machine and Danny Diamond – which also employs a sung hook for that peak-time hands-in-the-air feeling. The album is available for a limited period on the pair’s bandcamp on a name your price deal. Fly times indeed.

Posted on 6th August 2017 no comments