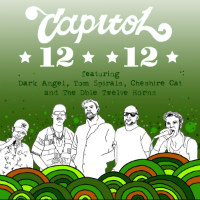 It’s been a while but Edinburgh-based dancehall dons, Capitol 1212, finally return (in their tenth year in the business, no less) with a new double single and a cast of thousands. Well, not so much a ‘cast’ as featured guests. And not so much ‘thousands’ as three vocalists and The Dble Twelve Horns. In fact the latter (just the two of them rather than twelve – or even twenty-four) aren’t even guests, they’re the new ‘in-house’ horn section. One thing we can be certain of though is reliably heavy reggae bizniz on the upbeat, horns-drenched skank of Some Will Try which sees Dark Angel exhort all and sundry to stand firm in the face of adversity. And there’s Real Talk Sound too of course, which employs a minor key, Tom Spirals and Cheshire Cat to deliver a refreshingly un-ironic message about the power of music to unite and heal. ‘Ear me now!
(Out now HERE)