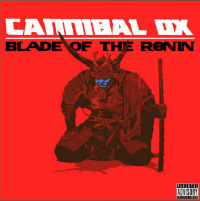 Not the first act this week to have taken their time releasing an LP, Cannibal Ox have only waited a mere decade and a half since their debut to drop the follow-up. 2001’s The Cold Vein was a massive critical and underground hit and Can Ox were arguably the last truly great alternative hip-hop act to emerge from the roughly ten year period following the splintering of hip-hop into mainstream and alternative movements in the early nineties. The question is, exactly how sharp is Blade Of The Ronin?

Let’s just say that Vast Aire and Vordul Mega have kept their edge keen. For a start they’ve scored a first rate producer in Bill Cosmiq who does a superb job of pastiching the distinctive swirling synthscapes and heavy beats that were a defining feature of The Cold Vein, notably on first single Iron Rose which most recalls the first LP, though Cosmiq goes for more conventional percussive patterns than El-P which, frankly, is a plus. There are also some pretty heavyweight guest appearances too – DOOM, Elzhi, Artifacts and U-God to name a few. Then of course there’s the formidable tag team of Vordul Mega and the unmistakeable Vast Aire, the latter of whom shows the verbal whetstone is still in regular use on Blade: The Art Of Ox, “Tell Flex we ’bout to blow like octane/ You know Cannibal Ox got mad slang/…They say a man who repeats himself is insane/ I mix my saliva with propane/ Flame on!”

As far as second LPs go then, it delivers about as much sonic swordplay as you could hope for. Of course it can’t have the same kind of impact as the first because the element of surprise is gone. There is however the surprise that Blade… sounds exactly like the sort of follow-up to The Cold Vein one might have expected all those years ago and frankly far more like such a follow-up than anyone has any right to expect after a decade and the loss of such a notable original producer as former Company Flow member and former founder of the Definitive Jux label, El-P. Makes you wonder how they’d fare with a ‘difficult third’ album. Maybe we’ll see in 2030…
(Out now on IGC Records)