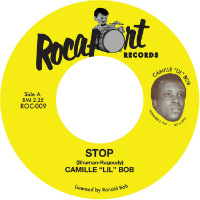 Rocafort Records turn in a scorching wax double-header of vintage gear with this re-press of two cuts from New Orleans soul legend Camille Bob – a man so good they named him twice. The first time with a girl’s name. But let’s not go into that. The A-side is massive horns-led funky soul Stop which is a certified peak time floor filler from 1969 while the flip is the earlier rnb number I Got Loaded from 1965 on which Bob gives the run down of his activity from the previous few nights plus what he’s doing ‘tonight’. Clue – it’s got something to do with bottles of alcohol.
(Out now on Rocafort Records)

Posted on 7th October 2015 no comments