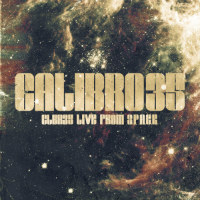 Long overdue some love from the monkey is this live album from Italian outfit Calibro 35, Live From Space. Which is pretty much what the band sound like in the studio these days having ditched their former stock-in-trade Euro car-chase funk for cosmic funk wigouts from the dark side of the sun on most recent album SPACE. Of course any band who plays live, will want to mix up the best of the new material with some old classics i.e both cosmic funk wigouts and Euro car-chase grooves in this band’s case – and what do you know? That’s exactly the composition of Live From SPACE, the first eight (of fourteen tracks) of which are all off SPACE or (in the case of CLBR 35 – the b-side to Bandits On Mars) a SPACE-era release.

The latter half of the album falls back on such tried and tested crime-funk classics as the aptly named franctic-ness of Eurocrime, the gangster swagger of A Fistful Of Lead and the itchy funk of Notte In Bovisa all (like every track on the album) performed with a such a degree of musicianship as to make you forget you’re listening to a live performance (recorded at the BIKO Club in Milan) – until you hear the crowd reaction. Stellar stuff.
(Out now on Record Kicks)

Posted on 13th November 2016 no comments