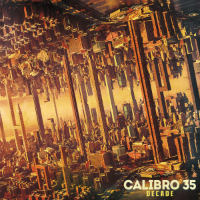 2018 sees Calibro 35 celebrate a ten year-long career by releasing their new long player entitled, appropriately enough, Decade. And if you thought their soundtrack funk schtick might sound a bit tired after that length of time – put such thoughts to bed – for the Milanese five-piece have not only revitalised their sonic palette with orchestral elements but included, among the more typical Schifrin/ Morricone/ Bacalov/ Axelrod-esque influences, nods to afrobeat and the spacey jazz of Sun-Ra. And you wonder why, unlike label mate Hannah Williams who has ‘only’ been sampled by Jay-Z, this lot can boast of having been sampled by both Jay-Z and Dr Dre.

It all starts innocuously enough with the afro-tinged lilt of Psycheground easing you in gently, all clavinets and muted horns. Of course, in Calibro 35-land we’re in the title sequence of whatever film is in their heads and surely this one features a lengthy single-take of a sixties sports car driving through a switchback-riddled mountain pass. Having lulled you into a false sense of security, the band suddenly drop recent single Superstudio – a cut which comes on like the love child of something by Badder Than Evil and a lost Dirty Harry theme outtake with a monster psych-funk ending. For variety, Decade also yields such delights as the tempo-switching jazz of Faster Faster! which provides retro hybrid spy/horror flick OST thrills, to offerings like the menacing Polymeri which begins with a minute or so of beatless, creepy synth-generated ambience before the gradual appearance of a frantic shuffling drums and an ending adorned by oriental-sounding strings. Highlights include the aforementioned Superstudio, the ominous Roy Budd-meets Luis Bacalov groove of Ambienti and the epic five-minute-long psychedelia of closer Travellers.

Players below and check the brand new John Snellingberg-directed video to Superstudio below that – upskirt stocking-top shots, psychedelic drugs, a hog-tied hero and – er – architecture. It’s got it all.
(Out now on Record Kicks)