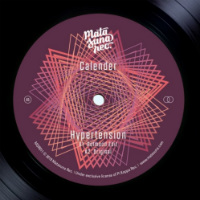 Having got the gap between releases down to around a month, the Matasuna Records crew now shave off a few more days and just for jollies make sure the release is a twelve inch to boot. A what? Oh yes – sorry kids – back in the day there were two sizes of vinyl record, one of which was a whole foot across! Indeed between the late seventies and the noughties, 12″s were the DJ standard in dance music and it was at the start of that period that the career of New Jersey band Calender played out. They’re most famous for the strings-augmented and decidedly un-cheesy funky disco of Hypertension of course and it is that track which appears on the A-side of this release in all its nearly-six minute original glory. This being Matasuna, the re-release is naturally accompanied by a remix and in this instance we’re looking at nu-disco/ house hybrid monster from Hotmood. If, like the monkey, the four-to-the-floor kicks on that have too house-y a feel for you, flip this bad boy over for the re-release of the lesser-known but horns-rich Latin funk shimmy of Ritmo Latino and the accompanying Voodoocuts remix – on which it’s all about the drums!
(Out now on Matasuna Records)