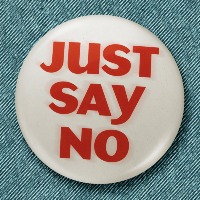 ‘Just say no’? Wasn’t that the Nancy Reagan-championed refrain of U.S. govt.-sponsored ‘keep kids off drugs’ campaign in the 80s and 90s?  And didn’t it come out at roughly the same time as the U.S. govt. was absolutely not involved in any way in trafficking cocaine as part of its Iran-Contra operation?  If only there had been a campaign to say ‘no’ to corrupt governmental bullshit too! And while here’s been a surfeit of that again recently, at least in 2021 Bronx Slang are on hand to counter the crap with their Jadell-produced new single.  By pure coincidence, this too is also called Just Say No and it finds them giving you the real dope about not listening to corrupt government lies to boot! What are the chances? Just Say No then – it ain’t no weed jam!
(Out now on Fabyl Recordings)