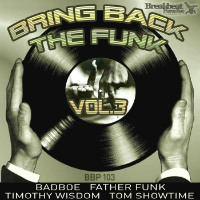 It’s sometimes easy to lose sight of the funk in the midst of all the wobble but Badboe‘s Breakbeat Paradise Recordings have made it a personal mission to ensure that the spirit of what JB started isn’t forgotten on planet breakbeat. For this year’s effort, proceedings are opened by Father Funk who loves to love you with a moody disco breaks number adorned with Timbaland vocals and a dash (or should that be ‘touch’) of Tony Touch. He is followed down an imaginary ‘Soul Train Line’ of producers by Timothy Wisdom who lifts the mood with an inspired refunking of real mean mother Etta James and the next man up – well – y’all know the name! It’s label boss Badboe of course. He’s not going to through a party at his gaff and not turn up now is he? And turn up he most certainly does, guiding both Sly & The Family Stone and Busta Rhymes into the same groove. All of which antics provide the ideal segue into Tom Showtime‘s classy closing rework of Grand Puba’s laid-back number I Like It. He’s the one who makes ‘they stink-box wet’ you see – at least by his own lights. Grand Puba that is. I can’t speak for Mr Showtime.
(Out 27 February on Breakbeat Paradise Recordings)

Posted on 24th February 2015 no comments