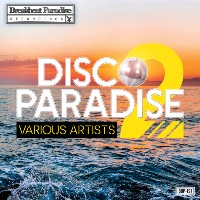 Following up on one of the label’s many compilation series is Breakbeat Paradise’s Disco Paradise Vol. 2 – a BBP allstars effort that manages to top Vol. 1 in a couple of ways. It’s longer for one, with fourteen tracks to its predecessor’s eight and it’s even more pumpingly – well – disco. Having said that, there’s all flavours and eras of disco represented with Luke The Knife going deep on a boogie funk tip, Badboe bringing the disco-rappin’ and ensuring the breaks are funky, and Morlack on a buzzsaw bass-tip. At times the disco is very much of the ‘nu’ variety – step forward Leygo (with his pounding Deputy Dave’s Disco), Funny Ox & Stabfinger (with Cliché) and Boydex’s Get It Now. Elsewhere, things more closely pay tribute to the traditional sound of the Paradise Garage, The Loft and Studio 54 – Joy Legend’s deep disco treat Let’s Go is one such bump and Pecoe’s funky nod to Loleatta Holloway another. Perhaps because of this fidelity, the latter two particularly stand out – though Badboe’s cut is especially on point (not to mention providing the perfect ‘gateway’ cut to transition between genres) along with the spacey Disco Paradise from the artist-formerly-known-as-Ewan Hoozami who has long travelled now under his nu-disco-nom-de-plume as Don Dayglow.
(Out 5 March on Breakbeat Paradise)