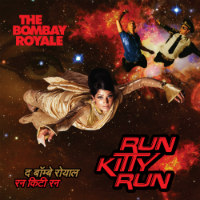 To misquote MC Coppa from all the way back in 2010, The Bombay Royale are a band with Bollywood plans and (no doubt) Bollywood fans who do weird dancing with their hands. And if they were all about the sixties sitar funk on first LP (2012’s You Me Bullets Love) seem now to be heading in a New Wave-influenced musical direction with the first single taken from forthcoming LP Run Kitty Run. How to explore such a manoeuvre in an audio-visual medium however? Perhaps a gloriously camp and OTT Bollywood-style video featuring a stone circle with psychedelic backdrop, a sword-fighting showdown between masked attackers and beautiful maidens and some sort of grand cosmic game in which one of the players looks like Keith Richards dressed as a Red Army general. More than enough for anyone to handle, I think you’ll agree.
(Out now on Hope Street Recordings)