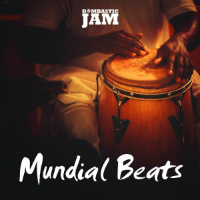 No doubt the first of many musical attempts to get into the spirit of 2014 Brazil World Cup fever, the Bombastic Jam label’s Mundial Beats compilation album puts in a highly respectable qualifying performance. The release consists of originals, remixes and exclusives as well as fielding a team of players who include the likes of new signing Icient Warrior and a number of big names on transfer. That’ll be types like Ghetto Funk and Scour Records’ Father Funk (in conjunction with Chimping) and Panama Cardoon from Carnibal Records, then.

It’s less a compilation of two halves than of one unified whole with a consistent performance throughout yielding world music-influenced breaks tunes that reveal various Latin, Greek, Carribbean and Afro tactics. Star players are Shantisan for his frantic remix of Smokey Bandits’ gypsy breaks number, Panama Cardoon for the cumbia breaks of Ritmo Salvaje and Basement Freaks‘ Prince-like, Monch-featuring Balkan Jam. Jumpers for goalposts? Isn’t it? Aren’t they?
(Out now on Bombastic Jam)