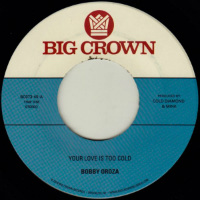 Big Crown signing Bobby Oroza is from Finland and has a new vinyl 7″ out – Your Love Is Too Cold. But if you’re expecting music that speaks of grim arctic winters, wind and snow howling around where you’re holed up drinking vodka until the sun returns some time around June, forget it. Despite its title, Oroza’s new one is an uptempo retro-soul cut that draws from northern, surf and psychedelic influences in a way that evokes cruising top down along a Baja highway warmed by a Santa Ana breeze. And while B-side slowie Deja Vu is far from a case of deja entendu, it does at least tap into the same wellsprings of dreamy lowrider psych-soul of previous single and underground hit This Love.
(Out 8 February on Big Crown)

Posted on 5th February 2019 no comments