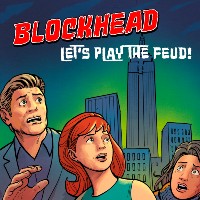 Sometime Ninjatune artist and formerly Aesop Rock’s go-to man for a beat, producer Blockhead is back with a new LP entitled Space Werewolves Will Be The End Of Us All, shortly. Before that, you get a taster of the sound of things to come in the form of single Let’s Play The Feud on which he genre surfs – or at least sub-genre surfs – with abandon. It’s got psych-soul melodies, it’s got trip-hoppy drum-breaks, nods to electronica and P-funk vocals, towards the end there’s even an Alice Coltrane-ish bit of sax with some jazzy percussion – hell – there’s probably a kitchen sink in there somewhere too. It’s precisely the sort of sound collage for which our man is known and right up the alley of those who dig RJD2, The Avalanches and such.
(Out now on Future Archive Recordings)